In February, Tom Tolputt and Anthony Ellis from South West Farm Consultants (SWFC) wrote a blog post telling us about an exciting soil health project they are working on with the Winchester Downs Cluster.  The aim of the project is to assess soil health and soil carbon stocks and identify ways in which farms can be more resilient for the future.

One of the ways in which farmers can improve soil health is by planting cover crops.  Sown after the main crop is harvested (or just before in some cases), cover crops can consist of a wide variety of plants including brassicas, phacelia, rye, radishes, vetches and clovers.  They are usually retained until the following commercial crop is planted and depending on the mixture used and location can provide many benefits such as:

Last season a farm in the Winchester Downs Cluster were able to see the results from their first attempt at cover cropping.  The cover crop used was a winter oat/phacelia mix sown on 4th September 2018.  It was then sprayed off quite early (11th December 2018) allowing the green cover to die back well during January in readiness for sowing.  A spring barley crop was then drilled on 23rd February, and the map below shows the yield results from August 2019. 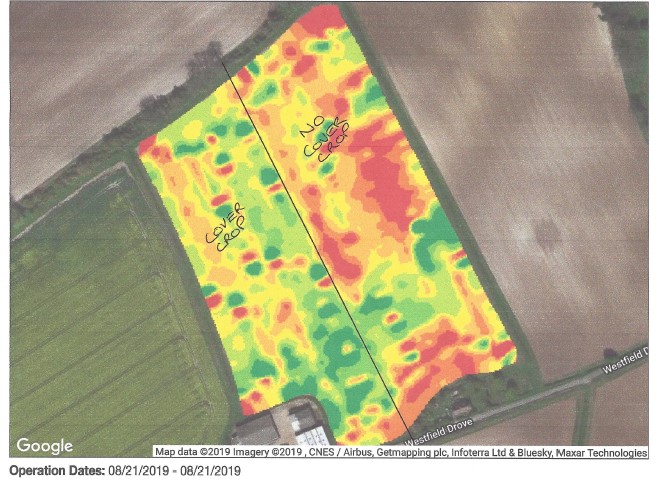 These initial results look very promising. This is very much the first step on a cover crop learning curve for the farm, but you wont be surprised to hear they are trialling a bigger area this year.