A one man bioblitz on a wildlife friendly farm

In order to deliver effective on-farm conservation, it helps to know what you have on the farm to start with.  By keeping track of species over time, it can also show if your efforts are being successful.  This is often easier said than done, as although something like a lapwing is relatively easy to identify, some of the rarer plants and insects are much harder to spot.  This is where experts like ecologist Graeme Lyons can help.  In this blog post, Graeme tells us about the first in a series of surveys he is undertaking on a farm in the Eastern South Downs Farmers Group and some of the surprises he finds along the way.  More information about Graeme’s work can be found in his blog – The Lyons Share.

A one man bioblitz on a wildlife friendly farm
Rewilding features so prominently in the minds of conservationists right now, but we must not forget it’s only part of the solution. Wildlife friendly farming can have huge benefits for conservation. I started this survey earlier in June. One big farm, split in two. One half on the Downs, the other half in the Weald. I am surveying as many taxa as possible as I can in six compartments in each half over six months from June through to May next year. So each round will take two days and be comprised of 12 hours solid recording.
Even though I have surveyed the top half of the farm for birds and arable plants before, I was blown away by how rich it was. I generated 1570 records during the first visit! All in all I recorded 532 species in 12 hours. That’s 251 vascular plants and 203 invertebrates (that’s just field dets and the spiders, all the others will be identified in the autumn and winter) and 48 birds. The unexpected highlight though is the umbellifer shown above. What I first thought had to be Corky-fruited Water-dropwort via a process of elimination (after some discussion with Frances Abraham and Nick Sturt of Sussex Botanical Recording Society) later turned out to be the nationally rare Great Pignut!!! A lifer! It’s so hard to stumble on new, native plants like this. Some context; in 2018, SBRS discovered 12 plants only 175 metres from this site in an area of different ownership. A huge thanks to everyone for their help with the identification, Here are some more shots. 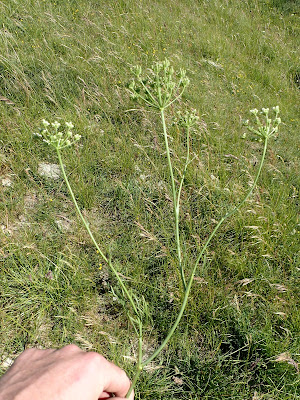 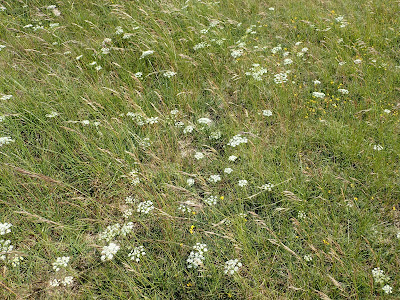 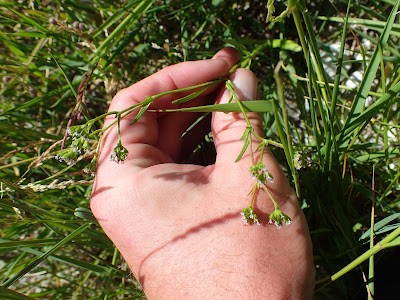 Just one Prickly Poppy but lots of Rough Poppy. This is one of my favourite plants. 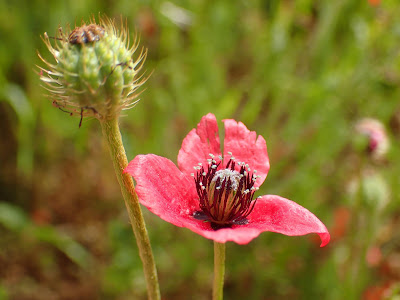 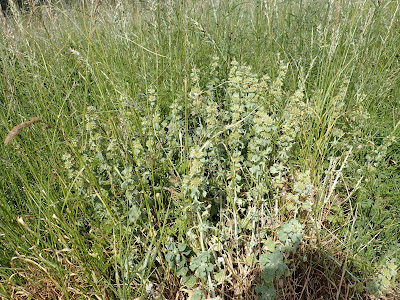 And in the Wealden part, lots of Corn Spurrey. 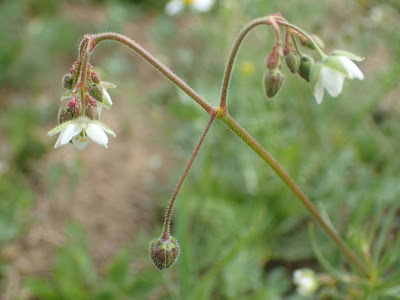 And I really like this shot of Narrow-bordered Five-spot Burnet. 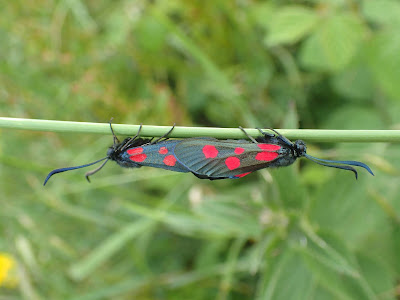 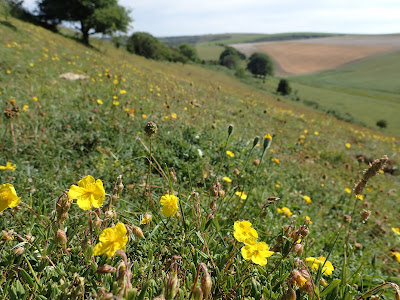 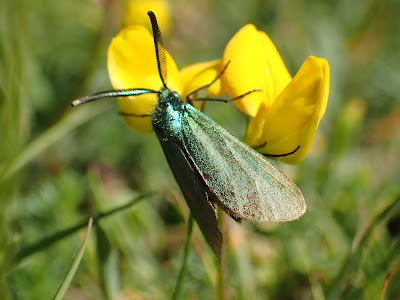 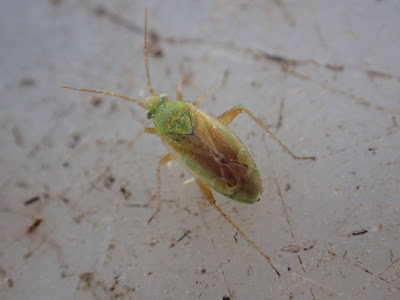 In the pockets of chalk-grassland, Omaloplia ruricola was locally frequent, a nationally scarce chafer. Not the best shot but you can see the variability here. 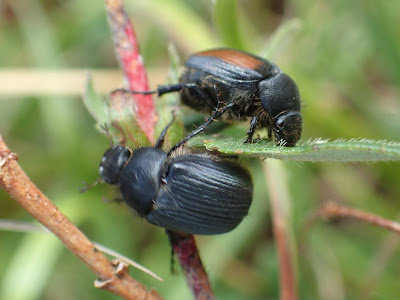 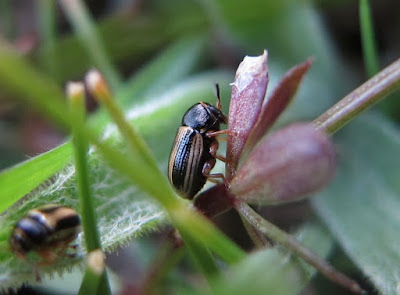 The site has dozens of territories of both Skylark and Corn Bunting. There was even a Corn Bunting holding territory on the Weald part of the farm, something I have not seen before. No doubt due to the population size on the top of the hill. Supplementary winter feeding and bird friendly stewardship options are really working. In the Wealden part, a Cuckoo was heard and a family of Nightingales seen with at least one fledgling spotted!

I really like this kind of approach to surveying, it’s utterly exhausting but is a great way to make sure you get around a big site like this. And I wholeheartedly believe that this method ALWAYS gives you a bigger total (and a more structured and repeatable one) than if you had just wandered where you like, we have a tendency to go to the same areas after the initial period of exploration. It also means you are less likely to miss the best areas, which is always a possibility on huge sites. You don’t get everything, you never can, but you if you want a good idea of what’s on a site across a large number of taxa, this really works. Birds are almost entirely done by ear and switching between taxa can sometimes mess with your search image. The days go REALLY quickly when you are working with the timer on.

What’s really interesting about this is after being fully booked by the end of January, my first full year as a freelancer, I soon lost half of my work by the end of March. Yet by May, much of it came back including some entirely new jobs. This one being a new job I would have had to turn down this year but due to Covid 19, I was able to take this job right on my door step! The fact the day was sandwiched between TWO twitches made it even more magical, my first in years. The Red-footed Falcon below was on the way to the site but the Blyth’s Reed Warbler was a lifer at Beachy Head in the evening, my first new British bird in three years. Definitely one of the best days natural history in 2020. I can’t wait for the next visits, with five more planned, is 1000 species possible on this amazing farm? I think so. 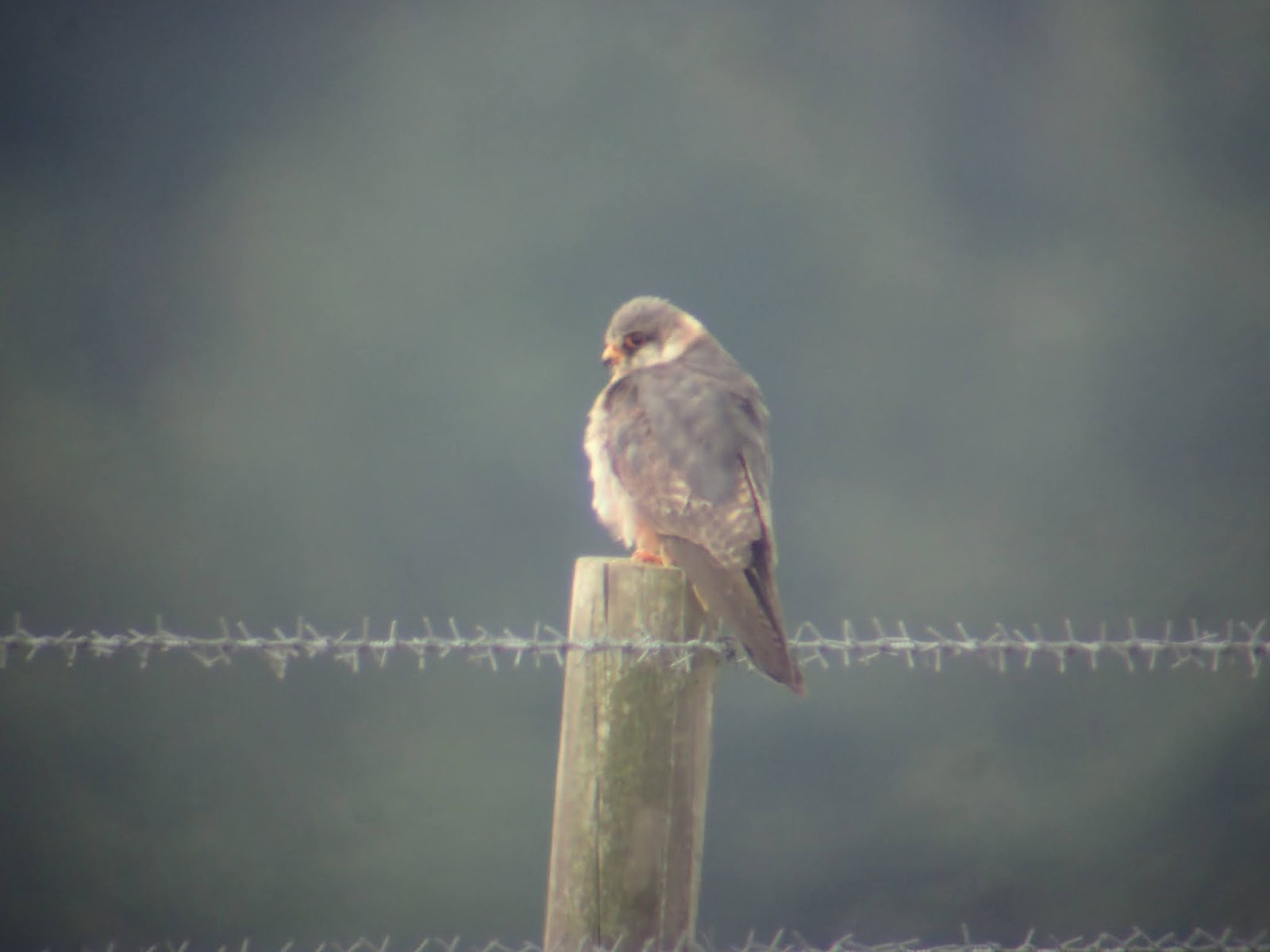 I love surveying farms, they are often full of surprises. Over the last 20 years, I have surveyed many farms, rewilding projects and nature reserves and one thing that is so important to remember is that they are all different. Not just between treatments but all farms are different from one another, all rewilding projects are different from one another. A one size fits all approach does not work. Neither does seeing anyone of these treatments as the answer to our problems, that’s is a binary thinking trap, they are all important. If everyone did the same we would have a huge loss in diversity. That’s why a spectrum of different approaches is so important, most of the interesting stuff happens in the grey areas and not the extremes. And without detailed and repeatable survey work, we are just uninformed doing what we think we should do without any real understanding, a bespoke and informed approach, in both space and time, is vital, as no site ever stays the same. My new motto, since I heard someone say it on the radio, is “Embrace complexity and nuance”. Something that is sadly not popular in the days of  social media, snap judgements and binary thinking we find ourselves in.