On 18th September the Rother Valley Farmer’s Group (RVFG) held a farmland bird event to look at what its members could do to improve conditions for priority species in their area.  The RVFG promotes environmental conservation, with members working actively together at the landscape scale.  The Group has collectively set a series of targets which include three species of farmland birds: barn owl, yellowhammer and lapwing.

The event was led by Dr. Richard Black from the RSPB and kindly hosted by RVFG member Mr. Andrew Leggs at Leggs Farm, West Sussex.  Dr. Black explained what different farmland birds need to thrive, which led to some interesting discussions on how this is best delivered while maintaining a profitable farm.  We saw how a barn had two bird boxes located at either end of the roof; one a home to kestrels and the other barn owls, both of which had successfully reared young this year.

One of the group questioned why he hadn’t managed to attract barn owls to part of his farm despite providing a nest box with good suitable habitat nearby; from the ensuing discussion it was thought likely that this may be due to a high number of tawny owls which can out compete and keep barn owls at bay. The increase in large raptors such as buzzards and red kites was also discussed, reasserting their place in nature.

We looked at two different game cover crops, one maize and the other a brassica green cover crop.  The latter offering a substantially better habitat resource for birds because it holds more invertebrates.  This is critical for young chicks during their first weeks and months of life as they require a diet rich in protein and fat to enable them to grow. 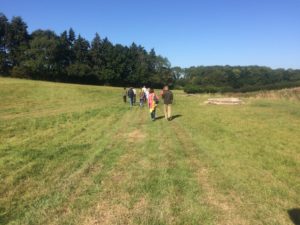 Dr. Black noted how the physical height and structure of crops is also important.  Short/open areas are needed to allow young birds to forage.  He went on to explain how yellowhammers will often try and nest in hedges near the ground at the start of the year, and how grass margins next to hedges helps to create the thick grassy understorey they require.  It was noted that cutting hedges on rotation round the farm on alternate years helps to provide further habitat variation and nesting opportunities for farmland birds.

We learnt that in many cases improving habitat for birds will also benefit conditions for pollinators, which in turn are important for the successful germination of many crops.  Agri-environment scheme options that help farmland birds were also discussed. The event ended with a buffet lunch at the nearby Unicorn Inn providing a friendly space to chat and discuss what we had seen on our guided walk. Many thanks to all our members for supporting this event.