At the end of February, the Eastern South Downs Farmer Cluster met to discuss farming practices being carried elsewhere in the southeast. The talks focused on how farmers could improve farmland biodiversity and at the same time improve the resilience of farming practices.

The morning kicked off with a talk from Stuart Fletcher, of Fletcher’s Flock, who talked about how he got into farming from working in the city. Starting out with 4 ewes he now mob grazes 500 ewes on tenanted, low-quality grassland and on arable cover crops. He went through how he is able to produce Michelin star quality lamb on very low-quality grasses with no inputs. He does this by utilising technology to carefully select his sheep for favourable genetic traits. He has selected for sheep that are able to grow well on poorer quality grassland and have stronger immune systems. As a result, he has now got lambs which wean at 60kg and do not require worming. Alongside careful genetic screening, he also employs mob grazing to promote the overall health of his flock. Moving his sheep from patch to patch around a field, every 2 days or so, to prevent overgrazing so that when the flock moves back to the first patch of grass, the grass has recovered. 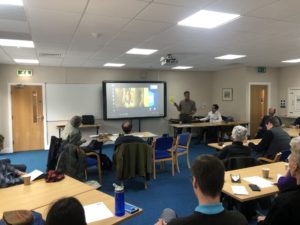 Next, we heard from Andrew Lingham and Richard Moyse who spoke to us about their work on Ranscombe Farm Reserve. They gave us a brief introduction of Ranscombe Farm Reserve and showed us a short video about the reserve done by the BBC’s Inside Out programme. Andrew then took us through how he farms the land at Ranscombe as well as on his tenanted land at Court Farm in the Kent Downs AONB. He discussed his work with the Pasture for Life certification as well as with regenerative agriculture. He discussed the importance of these regenerative methods in combating climate change and how they have made his farm more resilient to extreme weather events. He noted that he no longer has to use slug pellets as the natural predator numbers are high enough to keep the slugs in check. Richard then spoke about the work they have done to improve arable flower diversity at Ranscombe and how they incorporated this into the farming done on-site. He explained how they were utilising set aside land and stewardship options to further promote arable plant diversity. He also discussed Plant Life’s focus on the spreading of arable plants and how connecting habitats and certain farming methods allow for the spread of seeds of a variety of species. 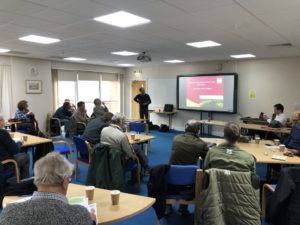 Finally, we heard from Dan Tuson, from Natural England, who talked about his work in the North Downs connecting up fragmented chalk grassland habitats. He works with farmers to find the best solutions to achieve this. He showed us the product of the nearly 20 years of work on this project with maps of where the various important species have expanded their ranges. His focus has been more on non-SSSI farmland, focusing on set aside land and trying to reverse the biodiversity decline. Methods such as green hay spreading and careful management of grazing regimes are being used to help encourage native wildflower seeding. Corridor habitats such as margins and swards have been created to connect these fragmented species-rich areas. Once established he discussed how indicator species such as butterflies are used to determine the health of the habitat.

Thank you again to our speakers and to Plumpton College for the venue! Below are some links to various websites related to our speakers for any more information you may want.